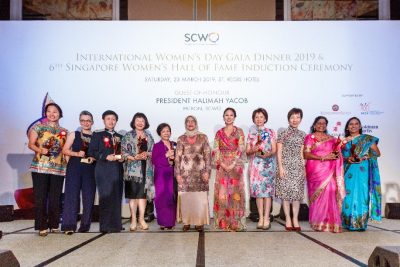 SCWO Patron and President of the Republic of Singapore, Mdm Halimah Yacob, Dr June Goh, along with the 2019 SWHF inductees

Every year, the Singapore Council of Women’s Organisations celebrates International Women’s Day with immense exuberance – this year was no different. Held at the St. Regis Hotel on the 23rd of March, the International Women’s Day (IWD) Gala Dinner and 6th Singapore Women’s Hall of Fame (SWHF) Induction Ceremony was indeed a special night where eight outstanding women were inducted to the Hall of Fame.

The ballroom was buzzing with immense female pride, with guests arriving in their glitzy gowns and traditional multi-coloured outfits. Very much like the fabric of our society, it was a night that brought together women from all walks of life in Singapore who were collectively celebrating the achievements of women pioneers.

The eight honourees inducted this year are:

THAM YEW CHIN, an award-winning writer who has authored more than 200 books.

ZAHRAH ZA’BA, a pioneer of Malay broadcasting. During the 1950s and 1960s, when radio was a major influence in the Malay community, Zahrah Za’ba ruled the airwaves

EVELYN NORRIS, an outstanding educator and former principal of Raffles Girls’ School (RGS), was a dynamic and hands-on principal, with tremendous foresight.

LIEW YUEN SIEN, another outstanding educator and former Principal of Nanyang Girls’ High School. She remained principal for nearly 40 years, playing a key role in shaping the values and lives of generations of Singapore women.

GLORY BARNABAS, whose running career began unexpectedly in 1963 when she was a trainee teacher. She went on to win numerous medals at the South-east Asian Peninsular Games and Asian Games in the 60s and 70s.

FLORENCE CHUA, the first female Deputy Commissioner of Police and the first women to be appointed as Director of the Criminal Investigation Division after 29 years of service.

GAN SIOW HUANG, the first female Brigadier-General in the Singapore Armed Forces. She is now in charge of running all the military airbases in Singapore and ensuring that RSAF aircraft are ready for their daily missions.

There were cheers from the crowd when these remarkable women received their trophies, and the room filled with prideful dynamism in honour of these women and their achievements. Many would agree that their achievements serve as inspiration for all women and Singaporeans, and milestones for the future generations to come. 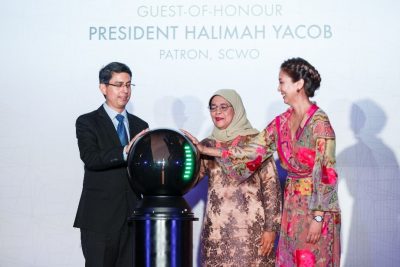 The night was even more special for SCWO as it was also the launch of “Seeds of Change”. Supported by the Ministry of Social and Family Development Office for Women’s Development (OWD) and administered by SCWO, the new fund has been set up to support women’s organisations to pilot or scale up women’s development programmes.

The energy in the ballroom that night was truly electrifying and was further uplifted when the children of Academie of Stars took centre stage. They regaled the crowd with their alluring voices and sheer talent.

Once again, the SCWO IWD Gala Dinner and SWHF Induction Ceremony had fulfilled its purpose – to bring our members, donors and supporters together in mutual celebration while honouring the contributions of remarkable women to Singapore’s history and growth. We look forward to celebrating more women next year as we continue to tirelessly work towards the tenets of “Equal Voice, Equal Space, Equal Worth”.

The team behind the gala dinner

Please click here for more information on the Seeds of Change Fund.